The phenomena of binaural beats and brainwave entrainment can induce the same mental state associated with traditional meditation practice, but quickly. 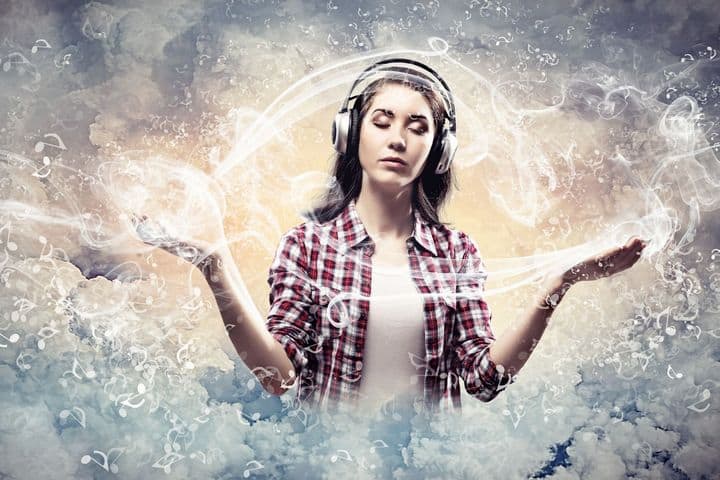 Our brains have been called “random thought generators.”

Negative thoughts cause chronic stress which, in many real ways, changes the function and structure of your brain. (3)

An audio technology called binaural beats can help quiet your mind quickly by inducing the kind of brainwave states experienced during meditation.

Every thought you have changes neural pathways and the output of brain chemicals, creating a cascade of effects on health and emotional well-being. (4, 5)

One of the most effective ways to control negative thinking is with meditation.

Over 1,000 studies have shown that meditation can make you smarter, happier, and healthier. (6)

But anyone who has tried to do meditation the traditional way can tell you that quieting your mind is not easy.

It can take years to master the process.

For those who struggle with focus and concentration, meditation can be frustrating and can become an additional source of stress.

In the past 50 years, technologies have been developed that can induce the same brainwave states as meditation when you simply listen to certain sounds.

One of the most popular forms of sound technology used for this purpose is known as binaural beats.

To fully understand binaural beats, you need to know a few basics about brain waves and a concept called brainwave entrainment.

Your brain cells generate electricity as a way to communicate with each other.

These patterns can be measured by electroencephalography (EEG), a method of recording electrical activity through the scalp. 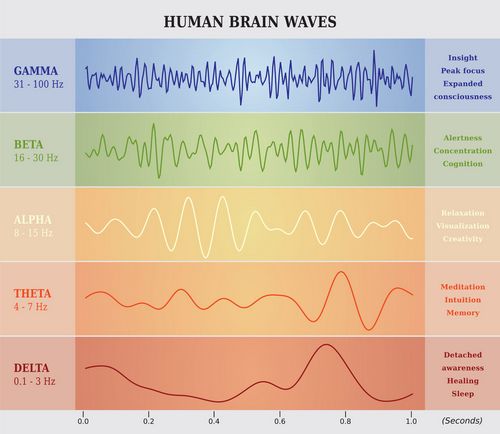 Each brainwave state corresponds to a different state of awareness.

Each brainwave state is associated with different states of consciousness.

You normally go in and out of different brainwave states depending on what you are experiencing.

But it’s possible to manipulate your brainwaves by meditating or by using binaural beats or other kinds of sound technology.

Related on Be Brain Fit —
Benefits of Meditation for Depression: Why It Works So Well

Binaural beats cause your brain to synchronize, or entrain, itself with the beat frequency.

This has the effect of inducing a desired brainwave pattern, letting you experience the benefits of that brainwave state at will.

Here’s a brief rundown on the characteristics of each state of consciousness. (7)

What Can a Brain Supplement Do for You?

➤ Struggling to learn and problem-solve?

➤ Discouraged by a lack of mental energy and drive?

The right brain supplement can help reverse all this.

Sleep is not simply not being awake.

It has its own stages and associated brainwave patterns.

Theta waves are associated with the drowsy state you experience as you are falling asleep, or during light sleep.

They can also be experienced during meditation.

The theta state is characterized by deep relaxation, daydreaming, and creativity.

It is also the brainwave state experienced during hypnosis. (8)

Your brain enters the alpha brainwave state almost immediately whenever you close your eyes.

Alpha waves are associated with relaxed wakefulness and can occur during light meditation.

Many brainwave meditations seek to induce this state since it’s the alpha state that’s believed to facilitate a bridge between conscious thought and the unconscious mind.

As long as you are physically active and mentally alert, you probably spend most of your waking day in a beta state.

Since the hallmark of the beta state is one of heightened alertness, it can be overdone.

Spending too much time in the beta state contributes to stress and anxiety.

Gamma Brain Waves (32 Hz and above)

Gamma brain waves (not to be confused with gamma rays) are the highest frequency brain waves.

They are the most recently discovered since they could not be measured until the development of digital electroencephalography.

They are also the least understood.

When in the gamma brainwave state, it is thought that the senses are sharpened and that feelings of happiness and peace predominate.

This is the brain wave state you tap into whenever you’re in “the zone” — the state of peak performance and blissful immersion.

Heightened focus, super concentration, and massive productivity are all said to be yours when you’re in the gamma state.

One study found that Buddhist monks can induce a gamma state through meditation. (9)

When counseling is what you need, why not have it on your terms?

✓ Effective: Very helpful for a wide range of behavioral and emotional issues, just like in-office counseling.

✓ Affordable: Much less expensive than office-based therapy. And no insurance hassles.

✓ Convenient: Communicate with your counselor online, when and how you want -- discreet, private, secure.

The phenomenon of entrainment was discovered by a Dutch scientist over four hundred years ago.

He noticed that his room full of pendulum clocks synchronized automatically.

Even when he intentionally disrupted their rhythms, they would always re-synchronize.

Brainwave entrainment is a high-tech sounding name for a very natural phenomenon.

If you’ve ever been mesmerized by the sound of ocean waves or a crackling fire, you’ve experienced brainwave entrainment.

Entrainment is commonly seen in nature.

Related on Be Brain Fit —
Meditation for Anxiety: Proven Way to Calm Your Mind

When you listen to sounds of a certain frequency, your brain waves will synchronize with that frequency.

You entrain every time you hear a musical beat that has you bobbing your head or tapping your foot.

Binaural beats is one of the most popular methods to utilize the phenomenon of brainwave entrainment.

Others include isochronic tones, monaural beats, and audiovisual entrainment.

By listening to MP3s or CDs that produce brainwave entrainment, you can induce a desired brainwave pattern quickly and reliably.

GIVE YOUR BRAIN A BOOST!

Get our Brain PowerUp Guide, free.

This means that our brainwave frequencies mostly fall below our audible range.

So how can we get our brains to entrain to sounds we can’t hear?

When two tones that are slightly dissimilar in frequency are processed by the brain, it registers a beat at the difference of the frequencies.

The diagram below illustrates how this works in practice.

If you listen to a 124 Hz sound in your left ear, and a 114 Hz sound in the right, your brain entrains to the difference — in this case to 10 Hz, which is in the alpha brainwave frequency range. 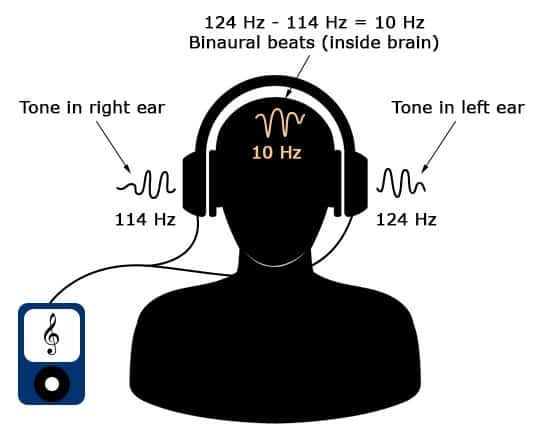 How the brain processes binaural beats.

Since each ear has to perceive a different frequency for binaural beats to be created, binaural beats are best experienced when the two tones are heard through stereo headphones.

It changes your biochemistry by modulating the production of hormones and neurotransmitters.

Listening to binaural beats can reduce levels of the stress hormone cortisol by as much as 80% and increase the sleep hormone melatonin by nearly 100%! (13)

Other biochemicals shown to be affected by binaural beats include DHEA, melatonin, serotonin, dopamine, epinephrine, and norepinephrine. (14)

The Advantage of Binaural Beats Meditation Over Traditional Meditation

Mindvalley, one of the world’s largest personal development publishers, surveyed their customers to understand “why people don’t meditate.”

Their customers were certainly aware of the benefits of meditation — that meditation can tame negative mental chatter to decrease stress and improve performance, mental well-being, and overall health.

So what obstacles stood in their way?

According to the 400,000+ people who responded, the main reasons people don’t stick with a meditation practice are:

Do any of these reasons sound like anything you’ve experienced?

Yeah, we’ve felt that way too.

All you have to do is put on a set of headphones or earbuds, relax, and listen.

This can bring your brain into a similar state as deep meditation quickly.

The study of how to manipulate brain waves for the enhancement of brain health and mental well-being is in its infancy.

So far one study, A Comprehensive Review of the Psychological Effects of Brainwave Entrainment, is often cited as the gold standard on the effectiveness of brainwave sound technology.

This meta-analysis of peer-reviewed studies found brainwave entrainment technologies, including binaural beats, to be beneficial for the following:

Impressively, just one session of brainwave entrainment meditation was found to be helpful for some conditions including memory, attention, stress, pain, headaches, and migraines.

This study concluded that:

You can read or download a copy of the study here.

Getting Started with Binaural Beats Meditation

If you’ve never listened to a binaural beats sound file before, click on the arrow below to play a sample.

Ideally, you should listen with headphones to get the full effect, but this will give you a general idea of what binaural beats sound like.

This sound is not very pleasant which is why most binaural beats meditation sound files are overlaid with music or environmental sounds.

Some binaural beats programs seek to bring about a particular state associated with meditation — usually alpha or theta, or sometimes the gamma state.

Others are designed to help alleviate specific problems or achieve specific goals.

One of the most unusual uses of binaural beats technology is to encourage lucid dreaming, a state of consciousness in which dreamers are aware that they are dreaming, to achieve various cognitive and emotional benefits.

Our favorite one-stop shop for meditations of all kinds is InsightTimer, the most popular free meditation app.

InsightTimer offers thousands of free meditations, including dozens that use binaural beats.

You can go directly to their binaural beats meditation category here.

Some binaural beats meditation programs offer free downloads to get you started:

Some websites that sell binaural beats meditations claim they “can’t” be dangerous because they produce brainwave states that naturally occur.

But this is faulty logic since your body can turn on many responses or create chemicals that, in excess, can do you harm.

And while binaural beats are generally considered safe for most people, there are a few exceptions.

There is some concern that listening to binaural beats could be a problem for anyone who has epilepsy, an irregular heartbeat, or wears a pacemaker.

Since brain waves and heart rhythms are both electrical patterns, it is theoretically possible that listening to binaural beats could trigger seizures or disrupt heartbeat rhythm in susceptible people.

Pregnant women and children should avoid binaural beats applications since their safety has not been determined for these groups.

If you have a serious mental disorder or brain injury, discuss with your doctor before giving binaural beats a try.

If you experience any negative effects while listening to a binaural beats meditation, such as headache, nausea, dizziness, or increased heartbeat, stop using it immediately and stick with traditional meditation.

Binaural Beats and Meditation: Take the Next Step

Meditation is one of the best things you can do for your health and mental well-being.

But for many people, mastering traditional meditation is hard, frustrating, and time-consuming.

There is a growing body of scientific research showing that using binaural beats meditation programs can provide benefits similar to traditional meditation.

To get started, download one of the binaural beats meditation sound files mentioned above.

Then, simply put on your headset and listen.

READ NEXT: Top 10 Meditation Techniques and Tips for Beginners