Fish oil adds omega-3 fats missing from the modern diet. Learn why it’s effective for depression and mood disorders and how to choose a quality supplement. 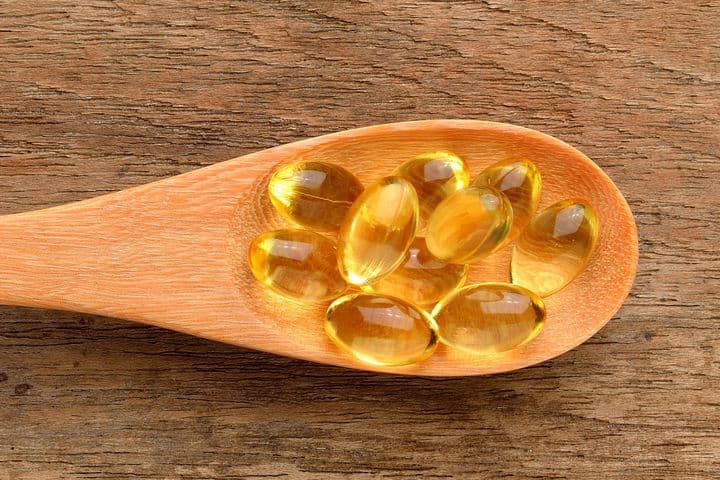 Fish oil is one of the most popular nutritional supplements.

Mostly it’s taken for heart health, but a lesser-known benefit is for a healthy, happy brain.

Your brain needs plenty of omega-3 fatty acids, the kind found in fish oil, to function at its best and to create healthy brain cells.

But the typical modern diet is largely missing the omega-3s your brain needs.

There’s evidence that low levels of omega-3s are an underlying cause for the significant increase in depression and mood disorders over the past 50 years.

It’s hard to get enough omega-3s from diet alone, but fish oil supplements can be the answer.

Here’s how every brain can benefit from fish oil and why it’s especially helpful for anyone with depression, anxiety, or other mood disorder.

It’s no exaggeration to say that the quality of your brain cells depends on the availability of omega-3s.

Omega-3s are an integral structural component of brain cell membranes and nerve cells.

When omega-3s aren’t available, your brain will use whatever inferior fats are available, creating inferior brain cells.

Healthy brain cells are your first line of defense against depression and other mood disorders.

This is very helpful for your brain.

Brain inflammation contributes to depression, anxiety, brain fog, and ADHD and even serious degenerative disorders like dementia and Alzheimer’s. (5)

In fact, brain inflammation, rather than an imbalance in brain chemicals, is now suspected to be a root cause of depression. (6)

Thus, you should minimize your consumption of them.

Unfortunately, typical modern diets — even if you buy your food at health food stores — are short in omega-3s and high in omega-6 fatty acids.

Our ancestors ate a diet with roughly equal amounts of omega-3s and omega-6s. (7)

(It’s the omega-3s in fish that give it the reputation of being a good brain food.)

Other decent sources of omega-3s are wild game, grass-fed beef, pasture-fed pork and lamb, and free-range chicken and their eggs which all contain significantly more omega-3s than their factory-farmed counterparts. (10)

The main source of inflammatory omega-6s is vegetable oils like canola, safflower, and soy oils.

These oils are not as healthy as we’ve been led to believe and are found in virtually all processed foods. 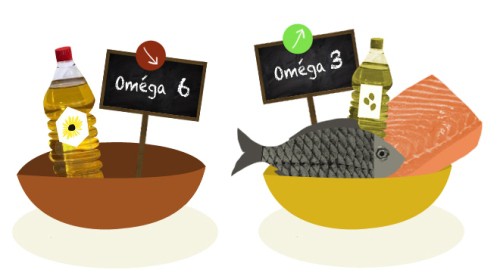 Foods that are primary sources of omega-6 and omega-3 fats.
Image courtesy of Ascanis.fr

Some experts believe that the ratio of omega-6s to omega-3s is most important.

Others believe that the absolute amounts matter most.

However you look at it, few of us get adequate omega-3s from food alone.

But you can easily meet your omega-3 needs with a fish oil supplement.

Are you getting enough omega-3s in your diet? Or should you supplement? This short quiz will let you know for sure.
—
Quiz courtesy of GOED, a not-for-profit organization

What Can a Brain Supplement Do for You?

➤ Struggling to learn and problem-solve?

➤ Discouraged by a lack of mental energy and drive?

The right brain supplement can help reverse all this.

The Benefits of Fish Oil for Mental Health

Fish oil is most often recommended to reduce the risk of heart disease and to decrease the inflammation of arthritis, but the latest research indicates that fish oil may not be as helpful for the heart as previously believed. (12)

However, fish oil supplementation has an impressive record for improving brain functions of all kinds — mood, memory, cognition, and general mental well-being. (13, 14)

Next, let’s take a look at what research has discovered about fish oil as a treatment for depression of all kinds as well as other mental health conditions.

How Fish Oil Helps Depression and Other Mood Disorders

Low levels of omega-3 have been linked to depression, anxiety, and other mood disorders and people with these disorders often benefit from fish oil supplements. (15, 16)

Fish oil has been found to improve depression symptoms in people of all ages and stages — children, teens, seniors, pregnant women, and everyone in between. (17, 18, 19, 20)

A review of studies concluded that omega-3s have significant antidepressant properties. (21)

Related on Be Brain Fit —
DHA Supplements: Why They’re Critical for Your Brain

After only three weeks of supplementation, an impressive 67% of study participants no longer met the criteria for being depressed. (22)

There are a few known mechanisms to explain for how fish oil can act as a natural antidepressant.

Fish oil increases the volume of areas of the brain that control depression and mood. (23)

Depression is usually associated with low levels of serotonin, but low dopamine is an underappreciated factor in depression as well.

It’s a disappointing fact that nearly half of people who try selective serotonin reuptake inhibitor (SSRI) antidepressants find them of little help.

But you can greatly increase the chances they’ll work by increasing your intake of fish.

Interestingly, people who eat fatty fish at least once a week are 3 times more likely to respond to antidepressants than non-fish eaters. (25)

Even when fish oil can’t take the place of antidepressant medication, it’s proven to be a useful adjunct to prescription medications or other treatments. (26)

When counseling is what you need, why not have it on your terms?

✓ Effective: Very helpful for a wide range of behavioral and emotional issues, just like in-office counseling.

✓ Affordable: Much less expensive than office-based therapy. And no insurance hassles.

✓ Convenient: Communicate with your counselor online, when and how you want -- discreet, private, secure.

An alarming increase in military suicides has researchers looking for answers.

Surprisingly, low DHA has been found to be a stronger predictor of suicide than battle-related stress.

Veterans with low levels of DHA were 62% more likely to commit suicide than those with the highest levels. (27)

Areas of the world where a lot of fish is eaten, like Japan and Iceland (147 and 225 pounds per year respectively), have low rates of SAD. (28)

This is particularly impressive when you consider Iceland’s northern latitude and lack of daylight during the winter.

In it, he revealed that Eskimos have virtually no depression — despite living in darkness half of the year — due to their generous daily intake of omega-3s (7 grams).

GIVE YOUR BRAIN A BOOST!

Get our Brain PowerUp Guide, free.

Women who develop postpartum depression tend to be deficient in omega-3s.

Moms-to-be can take fish oil as a natural alternative to prescription drugs during pregnancy and while breastfeeding to prevent postpartum depression.

And an excellent side benefit is that the extra DHA, an essential component in breast milk, will help the development of their baby’s brain. (29, 30)

People with anxiety have lower blood levels of omega-3s. (31)

One study found that adults who took DHA and EPA experienced a reduction in symptoms of anxiety, depression, fatigue, and mental confusion. (32)

Medical students are notoriously stressed out.

When medical students were given omega-3 supplements, they experienced a 20% reduction in anxiety symptoms. (33)

Bipolar disorder is frustrating to treat and the usual medication, lithium, does not work for everyone.

But omega-3s can help even out the mood swings of this disorder. (34)

Bipolar disorder has been linked to DHA deficiency and fish oil looks like a promising complementary treatment. (35)

There is no clearly defined Recommended Daily Allowance (RDA) for fish oil.

Experts generally recommend 500 to 1000 mg of total omega-3s per day to maintain health and avoid deficiency with daily therapeutic doses up to 3 grams generally considered safe. (36, 37, 38)

In one clinical trial, healthy adults who took 800 mg of DHA plus 1600 mg of EPA experienced fewer symptoms of depression and related negative moods. (39)

It’s not always clear what to look for when buying fish oil. 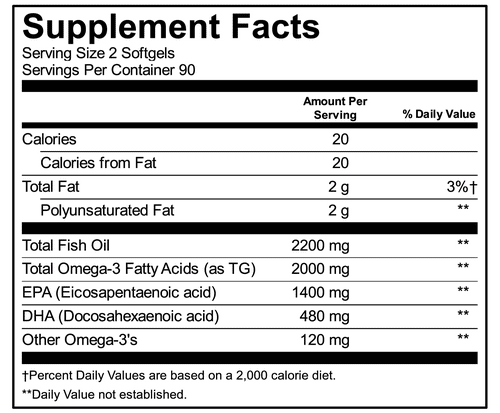 A National Institutes of Health workshop that included omega-3 experts from around the world determined that you should get a minimum of 220 mg each of DHA and EPA and this supplement exceeds that amount. (40)

Note that fish oil’s antidepressant effects will not be immediate.

Skip supplements that also contain omega-6s — you almost certainly already get plenty of these in your diet.

Look on the label for a guarantee that the supplement is free of toxins and contaminants.

Since fish oil readily oxidizes, find one that contains vitamin E or some other antioxidant to prevent spoilage.

There’s some debate as to whether cod liver oil is better than standard fish oil.

We suggest taking a pass on cod liver oil since it is high in vitamin A.

If you take enough cod liver oil to obtain therapeutic benefits for depression, you’ll be consuming dangerous levels of vitamin A.

Too much vitamin A can have serious consequences.

It can cause increased pressure in the brain, psychiatric disorders, depression, suicidal thoughts, coma, and even death. (43)

And obviously, if you have a known allergy to fish, you should avoid taking a fish oil supplement.

Note: Talk to your doctor before taking fish oil if you take drugs that increase the risk of bleeding like aspirin or blood thinners (such as warfarin). (44)

How to Maximize the Benefits of Fish Oil for Depression

One final tip for getting the maximum benefits from fish oil.

Take your fish oil and eat a healthy diet.

It’s unreasonable to expect fish oil alone to treat your depression, especially if you continue to eat a diet high in inflammatory omega-6s.

Omega-6s in excess can negate the beneficial effects of omega-3s.

Research shows that taking fish oil and following a Mediterranean diet is significantly more effective at alleviating depression than doing either alone. (45)

The Mediterranean diet, one of the most popular and widely researched eating plans, emphasizes unprocessed foods such as vegetables, fruits, nuts, fish, poultry, eggs, olive oil, fermented dairy, plus a little red wine.

Fish Oil for Depression: Take the Next Step

Fish oil is one of the most popular and widely studied nutritional supplements.

The omega-3 essential fatty acids found in fish oil are essential for a healthy brain and your first line of defense against depression and other mood disorders.

Studies show that fish oil can improve depression of all kinds and enhance the effects of antidepressant medications when they’re needed.

When taking fish oil for depression, find a high-quality supplement and take the proper dosage to assure maximum therapeutic value.

READ NEXT: The Brain Benefits of Omega-3 Fats